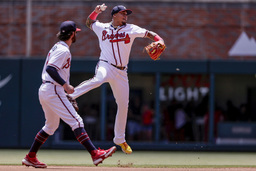 ATLANTA (AP) Austin Riley had a special month. He just wants to keep up the momentum and help the Atlanta Braves successfully defend their World Series title.

"I use the term consistent," he said. "I think that's the name of the game. My routine is very consistent right now, and I'm feeling good, and I'm getting pitches and I'm not missing them. So I think locked in is the term."

Riley hit a run-scoring double off Mark Melancon in the ninth inning, giving the Braves a 1-0 victory over Arizona on Sunday and a three-game sweep of the Diamondbacks.

Matt Olson singled with one out in the ninth against Melancon (3-9) and scored when Riley's double hit the fence in right-center on two hops. Olson slid headfirst, easily beating the throw.

Jansen (5-0) walked pinch-hitter Alek Thomas with two outs in the top half, but Thomas was caught stealing second by catcher Travis d'Arnaud when Thomas took a foot off the bag after passing the base with a headfirst slide.

Atlanta had lost eight of its last previous series finales. The Braves have swept six series this season but were just 1-5 in their prior six chances to sweep.

The Braves are 39-14 since June 1, the best record in the majors over that span. They stayed three games behind the NL East-leading New York Mets.

Atlanta is a big league-best 47-8 when scoring first.

Fried, an All-Star who has a 2.09 ERA over his last eight starts, allowed four hits and two walks with five strikeouts in seven innings.

Arizona's Merrill Kelly gave up three hits and two walks in seven innings with eight strikeouts, He lowered his ERA to 1.31 over his last six starts.

"He was moving the ball around," Fried said. "Guys were saying you don't know which way it's going, whether it's a ball or a strike. He keeps you off balance. Credit to him. I had to go out there and stay on top of it and get out of some jams knowing that runs were going to be pretty hard to come by today."

Riley became the 21st player with at least 26 extra-base hits in a single month and one of six since 1951. The previous was Houston's Richard Hidalgo, who had 27 in September 2000.

"It's pretty sweet," Riley said. "Anything I can do to help the team win in that fashion is awesome. It was hot out there, so I was ready to get in the AC."

Among players that have hit at least 10 home runs in a month, Riley's July batting average is the highest since San Francisco's Randy Winn batted .447 with 11 homers in September 2005. The only other Brave in modern franchise history to hit above .400 with 10 homers in a single month was Chipper Jones, who hit .412 with 11 home runs in July 1999, the year he won the MVP.

"You see guys go through stretches where they're hitting the ball well for a series or a week, but for him to do it for a whole month, that's extremely special," Fried said. "To see the work that he puts in and the preparation, it doesn't completely surprise me, but to be able to go out there and actually do it, it's special."

"He might be the best right-handed hitter in the league right now," Kelly said. "As long as I kept him in the park, I think it's a good day."

Arizona's Jake McCarthy caught William Contreras' flyball in the left-field corner in the second but dropped the ball as he tried to transfer it to his glove while running into the wall. With runners on first and second, McCarthy threw to shortstop Geraldo Perdomo, who relayed third baseman Josh Rojas for one out. Rojas threw to second for the second out of the inning-ending double play.

Braves: Open a two-game home series against Philadelphia on Tuesday.