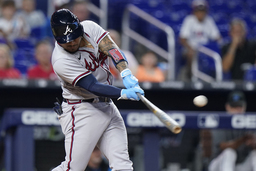 MIAMI (AP) Chadwick Tromp doubled twice, singled and drove in three runs in his first major league action of the season, leading the Atlanta Braves over the Miami Marlins 5-2 Saturday in the opening game of a doubleheader.

Matt Olson homered and Ronald Acuna Jr. and Robbie Grossman had two hits each for the Braves, who won their fourth straight after losing four of five to the NL East-leading New York Mets.

"It's nice to come up here when they need me and produce," Muller said. "Now they know I'm ready whenever they need me."

The Marlins have lost 11 of 12 at home and scored 21 runs total through their first 11 games in August.

The 27-year-old Tromp played 33 games for San Francisco in the past two seasons. The Braves claimed the catcher off waivers last September.

"You're in Triple-A staying ready the whole year then when you get called up, it's like riding a bike, another day in the office," Tromp said.

Tromp's two-run double with the bases loaded capped a three-run fourth and put Atlanta ahead 3-0. Tromp experienced cramping in his left quad as he reached second, prompting immediate attention from Braves training personnel, but he remained in the game.

Miami reduced the gap on Jesus Aguilar's two-run homer in the bottom half. Aguilar drove a slider from Muller into the seats in left for his 14th home run.

Olson connected off Marlins starter Jesus Luzardo for a solo drive in the fifth and second homer of the series.

The Braves padded their lead on Tromp's RBI single in the eighth. Perhaps feeling the effects of his earlier double, Tromp stayed at first as the line drive rolled into foul territory in deep left.

"I want to be honest, I think I could have" gone for the extra base, Tromp said. "It was funny. I wanted to go to second. Bring me a wheelchair."

Jackson Stephens relieved Muller and pitched two scoreless innings. Raisel Iglesias got the three outs in the eighth before Kenley Jansen closed with a scoreless ninth for his 26th save.

"Some (bullpen) guys will have to pitch different roles in the second game," Braves manager Brian Snitker said. "But we've got guys that have experience closing and guys available to pitch."

In his only other appearance with the Braves this season, Muller allowed seven runs in 2 2/3 innings at Texas May 1. The native of Dallas welcomed another opportunity for a better performance.

"It was my hometown and Nolan Ryan and George W. Bush were there so that really wasn't the best," Muller said. "This is awesome - being part of helping the team win and doing my job. It's the best feeling."

Luzardo (3-5) allowed four runs and seven hits in five innings. The left-hander walked two and struck out six. His first walk - to Michael Harris II with the bases loaded in the fourth - gave Atlanta a 1-0 lead.

"I had the chance to get out of it there," Luzardo said. "Unacceptable."

The Braves optioned RHP Jay Jackson to Triple-A Gwinnett to open Muller's spot on the roster.

The Marlins selected RHP A.J. Ladwig from Double-A Pensacola as their 27th man for the doubleheader.

Former Dallas Cowboys and Miami Dolphins coach Jimmy Johnson threw the ceremonial first pitch before the game. Johnson also spent five seasons at the University of Miami, where the Hall of Fame coach guided the Hurricanes to the 1987 national championship. The Hurricanes played their home games at the Orange Bowl until the facility was razed to build the Marlins' current home stadium.

Marlins: INF Jazz Chisholm Jr. (right lower back strain) continues to rehab at the club's spring training facility in Jupiter, but has not moved into baseball activities. ... OF Avisail Garcia (left hamstring strain) is continuing his strengthening exercises and began a running program Friday.

Braves: RHP Ian Anderson (9-6, 5.11) will start the second game of the doubleheader Saturday night. The club has not announced a starter for the series finale Sunday.

Marlins: have not announced a starter for the second game, while LHP Braxton Garrett (2-6, 4.02) will start Sunday.