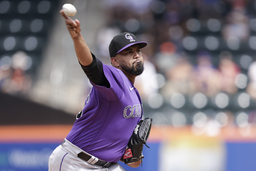 Marquez, an All-Star last season, lowered his ERA to 4.97.

"German's had his ups and downs this year," Rockies manager Bud Black said. "But had a feeling he was going to rise to the occasion in New York against one of the premier pitchers in the game. And he did. Very proud of him."

Brian Serven's sacrifice fly off Scherzer in the seventh gave the Rockies their second 1-0 win over the Mets. The other one came at Citi Field in August 2012.

Marquez (7-10) struck out five and walked two, improving to 2-1 with a 1.42 ERA in three road starts against the Mets. The right-hander threw a seven-inning complete game in his previous start at Citi Field on April 17, 2021.

"I think there's certain ballparks that you feel comfortable in, whether it's the mound, the visuals, how the plate and the batter's box looks, how the backstop (looks)," Black said. "All those things are visually pleasing to pitchers' eyes at certain ballparks. And maybe this is for German."

Scherzer (9-4) gave up four hits and racked up 11 strikeouts over seven innings in his 110th double-digit strikeout game - tying Roger Clemens for third on the career list behind Nolan Ryan and Randy Johnson.

The three-time Cy Young Award winner was trying to join former teammate Justin Verlander (242) and Zack Greinke (223) as the only active pitchers with 200 wins.

The teams combined for just two hits through six innings - a bloop single by Charlie Blackmon for Colorado in the first and a single by Jeff McNeil for New York in the fifth.

The last-place Rockies broke the stalemate in the seventh, when they quickly loaded the bases on C.J. Cron's single, Jose Iglesias' bunt single and Randal Grichuk's infield single. Serven delivered his sacrifice fly to deep right field on the first pitch after Sam Hilliard struck out.

"That was a lot of fun, watching both of them compete," Serven said. "Two great pitchers and obviously Scherzer's as decorated as he is. Just a lot of fun to watch and be a part of."

Scherzer ended his afternoon by striking out Garrett Hampson with his 112th pitch - his most since throwing 119 for Washington on Sept. 20, 2020. The right-hander has a 2.10 ERA in 11 starts since being activated from the injured list on July 5.

"Nothing-nothing ballgame, you know any little thing can beat you in those situations," Scherzer said. "For me, I was just focused on trying to keep the ball in the ballpark. I was able to do that today and unfortunately they got a couple infield hits there in the seventh."

Brett Baty singled with one out in the eighth against Rockies reliever Carlos Estevez and went to second on a wild pitch but was stranded when Estevez struck out pinch-hitter Starling Marte and Brandon Nimmo.

Daniel Bard gave up a one-out single to Pete Alonso in the ninth but struck out Eduardo Escobar and retired McNeil on a grounder to finish the three-hitter for his 27th save.

The 1-0 win was the second of the season for the Rockies. Marquez was also the starter and winner on June 24, when he allowed three hits in 7 2/3 innings against Minnesota.

"He's thrown a couple good ones," Black said. "But I think the circumstances - three tough losses here, Sunday day game against one of the best pitchers of the last couple decades - you've got to really think that this might be the best."

In the fifth inning, SNY cameras caught injured Mets pitcher Carlos Carrasco leaning on the top of the dugout with a Scherzer strikeout counter bobblehead next to him. The bobblehead was given out at Friday's game. Scherzer's 11 strikeouts increased his career total to 3,168 and lifted him into 13th place - one ahead of Verlander, who exited his start for Houston with right calf discomfort after striking out six over three innings.

Rockies: RHP Alex Colome (right elbow) was activated from the injured list after missing the minimum 15 days. LHP Lucas Gilbreath, who last pitched on Friday, was placed on the IL with a left elbow flexor strain.

Rockies: Following an off day, RHP Jose Urena (2-5, 5.98 ERA) starts the opener of a three-game series at Atlanta on Tuesday. Urena allowed a career-high nine earned runs in just 1 1/3 innings against Texas on Wednesday.

Mets: After a day off, the 10-game homestand continues Tuesday night when RHP Taijuan Walker (10-3, 3.38 ERA) starts the opener of a three-game showdown against the NL West-leading Los Angeles Dodgers.