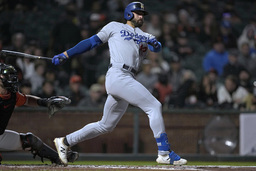 The Los Angeles Dodgers are counting on much more from May down the stretch and into the postseason - and his post-Tommy John form is coming along well that no added risk is worth it.

"Getting him out of the game feeling good is the win," Roberts said. "... We want to make sure we take care of him."

May (2-2) struck out four and walked one, dazzling in his fifth start since returning from the elbow reconstructive surgery in May 2021. The Dodgers pushed his outing back a couple of days because of some arm soreness and had him on a pitch limit of 75-80 after he had lost his previous two decisions and had a three-start winless stretch.

May didn't even realize there was a no-hitter going until he sat down for the night. He is encouraged with the progress in his latest outing, hoping it is something to build off for the rest of the way.

"Huge," he said. "If I can throw strikes I'm going to get outs quick."

Alex Vesia relieved for the sixth and allowed a two-out infield single to Luis Gonzalez for the Giants' first hit. Caleb Ferguson and Phil Bickford finished the two-hit shutout.

Justin Turner's 34th double leading off the fourth tied his career high and ignited the Dodgers' decisive inning - then he hit another in the fifth.

"Obviously the home run numbers aren't what they've been the last couple years but still feel like I'm taking good at-bats and driving balls in the gaps," Turner said. "I guess it's kind of cool to have a career high in doubles."

The Dodgers (99-44) clinched their ninth division crown in 10 years Tuesday at Arizona and are one victory away from their second consecutive 100-win season and third straight in a full year - excluding the shortened 60-game 2020 COVID-19 season.

This marks a far different September scenario than a year ago for these rivals: The Giants claimed the NL West on the final day of the regular season in 2021 to win 107 games and hold off the 106-win Dodgers, who then beat San Francisco in a thrilling five-game NL Division Series.

Giants right-hander Logan Webb (13-9) had a two-start winning streak snapped. He allowed four runs on seven hits in his second-shortest outing all year of four innings.

The Dodgers are 13-4 against the Giants this season.

"They've been the better baseball team all year," San Francisco manager Gabe Kapler said. "The distance between us in the standings is disappointing, it's annoying but it's sort of irrelevant. If you're not winning the division and you're not in the playoffs, there's plenty of disappointment right there, you don't have to layer on anything related to an exact number of games."

Former Giants fan favorite and right fielder Hunter Pence will be honored with a spot on the team's Wall of Fame during an on-field pregame ceremony Saturday.

The four-time All-Star expects about 100 of his family and friends to attend, including a sister coming from Australia with her family.

He will be the 55th player with a Wall of Fame honor.

"It's like my second wedding," Pence said, thrilled to be recognized for his contributions to the club over parts of eight seasons.

Dodgers: RHP Tony Gonsolin (right forearm strain) will throw another bullpen session this weekend. ... 2B Gavin Lux, sidelined since Sept. 1 by back discomfort, is slated to start Saturday then take Sunday off before playing again Monday and Tuesday vs. Arizona.

The Giants claimed 1B/OF Taylor Jones off waivers from the Astros and optioned him to Triple-A Sacramento. INF Jose Rojas was designated for assignment.

LHP Julio Urias (16-7, 2.30 ERA) starts for the Dodgers in the middle game of the series Saturday night having gone 3-1 with a 0.75 ERA against San Francisco this season. The Giants hadn't named a pitcher.