Wentz sharp for Tigers in 3-2 victory over Baltimore 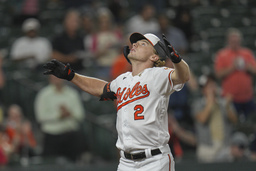 BALTIMORE (AP) Joey Wentz took a shutout into the sixth inning and Akil Baddoo and Kerry Carpenter homered to lift the Detroit Tigers to a 3-2 victory over the fading Baltimore Orioles on Tuesday night.

Wentz (2-2) allowed two hits and two walks in 5 2/3 innings. It was the third time in five big league starts that the rookie has held the opposition scoreless.

Rookie standout Gunnar Henderson hit a two-run homer in the seventh for Baltimore's first runs of the series. The Tigers routed the Orioles 11-0 the previous night.

Austin Voth (5-3) allowed two runs and six hits in five innings for the Orioles, who have lost four of five. Baltimore entered the night five games behind Seattle for the American League's final wild card.

"We're not the only team that's played this many games," Orioles manager Brandon Hyde said. "I think the league's tired. It's part of being a big leaguer at the end of September and we've got to learn how to push through it."

It was a bit of an adventure for Detroit after Wentz left the game. Alex Lange allowed a walk but struck out Ramon Urias with two on for the final out of the sixth. Joe Jimenez allowed Henderson's two-out homer and then a single by Ryan Mountcastle. Andrew Chafin then came on and walked a batter before striking out Adley Rutschman to end the seventh.

"We felt like we were on our heels," Tigers manager A.J. Hinch said. "We were just trying to get to the finish line. We had to use a lot of guys to do it."

Chafin yielded a leadoff single in the eighth, but a double play helped him through that inning. Gregory Soto worked a perfect ninth for his 26th save in 28 chances.

The bottom of Baltimore's order did much of the damage. Jeimer Candelario had four hits in the No. 8 spot, and Baddoo had a homer and a double batting after him.

The Tigers held a news conference in Detroit to introduce Scott Harris, their new president of baseball operations. Harris outlined his vision for the organization, which centered around three areas. The first two are acquiring and retaining young players, and getting the most from that talent.

His third topic of emphasis was a little more specific - the strike zone.

Detroit is 29th in the major leagues in on-base percentage.

Harris said he intends to hire a general manager to join his front office at some point.

Tigers: Miguel Cabrera, who came back from a biceps injury Monday, had Tuesday's game off.