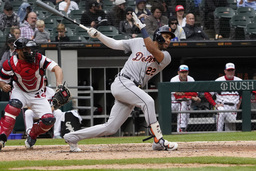 CHICAGO (AP) Dylan Cease pitched six scoreless innings, but the White Sox bullpen got tagged and Chicago was eliminated in the AL Central with a 4-1 loss to the Detroit Tigers on Sunday.

Jonathan Schoop hit a tiebreaking single in the eighth and Chicago's sixth straight loss clinched the division for Cleveland. The Guardians held a big lead in the ninth at Texas when the clinching became official, and they held on for a 10-4 victory.

The White Sox, who won the AL Central last season in their first year under manager Tony La Russa, slipped to 76-77. La Russa hasn't run the team since August because of a medical issue, and Miguel Cairo has been the acting manager.

"Today was the worst one," Cairo said. "Today was, that's not acceptable. That's not baseball. That's not what the Chicago White Sox are about. It was terrible."

Andrew Chafin (2-3) pitched a scoreless inning for Detroit. Gregory Soto got his 28th save.

Schoop singled off Kendall Graveman (3-4) for a 2-1 lead. Jeimer Candelario added an RBI single and another run scored on a wild pitch.

Cease, a Cy Young Award candidate, allowed four hits, struck out five and walked three. He is 14-7 and lowered his ERA to 2.06, second best in the majors to Houston's Justin Verlander at 1.82.

Tigers center fielder Riley Greene made a pair of highlight catches. He denied Andrew Vaughn of a homer with a leaping grab over the wall in the fourth.

"Once I hit the track, I knew I was going to have to get up there," Greene said. "I jumped and kind of said a prayer and threw my glove up."

Greene also took an extra-base hit away from Adam Engel with a running catch before banging into the wall in the third.

Harold Castro had three hits for the last-place Tigers, who have won five of six and finished 7-12 against Chicago.

Castro hit a ground-rule double off Cease with two outs in the first when a security guard down the right-field line attempted to field the ball, which bounced off his glove.

Victor Reyes doubled off White Sox reliever Reynaldo Lopez to tie it at 1 in the seventh.

"You got to come back Tuesday (against Minnesota)," Cairo said. "They are all playing, Tuesday until the last game. So they better bring some effort. It was kind of embarrassing."

Moncada homered on Tyler Alexander's first pitch in the fourth for a 1-0 lead, ending Alexander's streak of 10 consecutive scoreless innings.

Cease escaped bases-loaded jams twice. Javier Baez fouled out to the catcher on Cease's first pitch to end the fifth after a double and two walks.

Detroit also loaded the bases with two singles and a hit batter in the sixth before Cease got a 5-2-3 double play and a flyout to end the inning.

"If you watch the game, that was bad, besides Cease pitched really good and kept us in the game," Cairo said.

Alexander gave up a run and four hits in six innings.

The White Sox fell to 13-12 under Cairo and 35-43 at home. They have not won more than six in a row and ranked second-to-last in the majors with a .981 fielding percentage entering Sunday. Chicago has hit just 144 homers, 97 behind the No. 1 Yankees.

White Sox: 1B Jose Abreu and DH Eloy Jimenez were out of the lineup for rest. "I think it was May the last (off day) he got," Cairo said about Abreu. "He's been playing so hard for us, he needed a day. Eloy has been playing every single game too. He needs a day too."