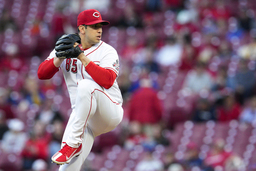 The Reds (62-99) are trying to avoid the second 100-loss season in franchise history. They were 61-101 in 1982 while in the process of dismantling the dominant Big Red Machine clubs.

Chuckie Robinson tied it for Cincinnati in the seventh with a two-run homer off Keegan Thompson.

"Our team was playing like it was the middle of the summer, doing everything we could to win that game," Reds manager David Bell said.

Willson Contreras and Nico Hoerner homered for the Cubs. Hughes (2-3) took the loss. The season finale on Wednesday could be Contreras' final game in a Cubs uniform.

"I thought he really had the two-seamer going today," Cubs manager David Ross said. "The breaking stuff wasn't quite as sharp as it had been for me, but being able to navigate through the lineup was good."

Luis Cessa held the Cubs hitless until Contreras led off the fourth with his 22nd home run of the season, two shy of his career high set in in 2019. Cessa left during the sixth inning with a knee injury.

Hoerner's homer, his 10th of the season, made it 2-0 in the seventh before the Reds rallied.

"It was an exciting way to win a ballgame," Steer said. "It's a pretty cool feeling for me. We need to come in tomorrow and finish strong."

It was the fourth career scoreless start for Assad who is bidding to be part of the Cubs rotation next season. Assad earned his second career win in his last start on Sept. 29 and is 2-2 with a 3.11 ERA. "It's really not up to me, the decision on where I will fit for next season," Assad said. "I will just have to put in the work in the offseason."

Reds: 2B Jonathan India left after fouling a ball off his left leg in the third. Matt Reynolds replaced him at 2B. ... OF TJ Friedl (right hamstring strain) was placed on the 10-day injured list.