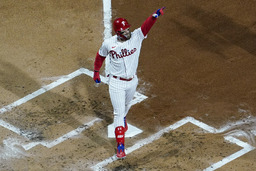 PHILADELPHIA (AP) Bryce Harper bashed a home run on the first World Series pitch he saw in Philadelphia, and then figured out how the Phillies could hit a few more.

The $330 million star offered quiet advice to Alec Bohm - and then it got really loud in Philadelphia.

As for those whispers in May that the Phillies were finished? Forget about 'em. The secret has long been out: these Phillies are for real.

Now, they're two wins away from their first World Series championship since 2008.

Harper hammered his sixth postseason home run, whispered an assist to Bohm before his solo shot and the Phillies tied a World Series record with five homers to rout the Houston Astros 7-0 Tuesday night and take a 2-1 Series lead.

Those Phillies couldn't finish the job.

Ranger Suarez tossed three-hit ball over five shutout innings and inched this year's team closer to getting it done.

Harper, Bohm, Marsh and the rest of the Phillies on the last team to qualify for the playoffs are two wins away from ending the season as the last team standing. With a sparkling 6-0 record at Citizens Bank Park this postseason, the Phillies just may not return to Texas.

"Just being back home, I think is such a momentum swing for us, just for the pure fact of our fan base," Harper said. "This whole city is so excited to be in this moment, and we're just thrilled to be able to play in front of them and have this opportunity."

Another red, raucous, resolute crowd of 45,712 let the Astros have it from the first pitch with chants of "Cheater! Cheater!" for Jose Altuve and "Check the Bat! Check the Bat!" for Martin Maldonado.

The fans - already amped from the jump after another sliding catch by right fielder Nick Castellanos in the first - didn't wait long to go wild for the home run barrage.

With leadoff hitter Schwarber on first base, Harper repeated his flair for playoff power when he ripped a two-run shot off McCullers into the right field seats for the fast lead. That made Harper 2 for 2 on home run swings in Philly - he sent the Phillies to the World Series with a two-run drive in Game 5 of the NL Championship Series to beat San Diego.

Harper crossed the plate and again exclaimed "This is my house!" before he ripped off his helmet, exposed his Phillie Phanatic headband and was mobbed by teammates in the dugout.

Harper's homers shake the stadium to the point they should be measured on the Richter scale rather than in feet - and they seem as automatic these days as a Phillie Phanatic spin on his ATV. Harper has hit four postseason homers that gave the Phillies the lead and showed that, yes, Bryce Bombs do go off in November, the first time more World Series games will be played in this month than October.

Oh, and Harper might have a second career as a homer whisperer.

Harper beckoned Bohm from the on-deck circle and back to the dugout for a quick word of advice.

"I think any time you have information, you want to be able to give that to your teammates at any point," Harper said. "Anytime I can help my teammates, throughout the whole season, we've done that."

Whatever the quiet counseling was, it worked, and Bohm lined his first postseason homer leading off the second inning and the 1,000th in World Series history into the left field seats for 3-0 lead.

So c'mon, Alec, fess up, what did Bryce tell you?

"That's between us," Bohm said with a shrug and a big smile.

Marsh took the baton on the long-ball relay and knocked one into the right field seats that was dropped by a young kid from Delaware. The home run stood after a brief review - as it seems nothing can interfere with Philadelphia's playoff push - and it was 4-0.

With that, McCullers had allowed four homers to his first nine batters. The right-hander who got his left triceps inked with nods to Houston got absolutely tattooed by the Phillies.

"It was kind of mind-boggling because he doesn't give up homers," Astros manager Dusty Baker said. "He usually keeps the ball in the ballpark. He wasn't satisfied with it. We were very surprised by it."

Schwarber, the NL home run champion, again dumped a two-run shot into a thicket of English ivy, Arborvitae and Holly beyond center field, and Hoskins connected on solo shot for a 7-0 lead that ended McCullers' night.

McCullers became the first pitcher to give up five home runs in a World Series game.

"I don't really get hit around like that, so I was a little bit in disbelief," McCullers said.

Suarez, the scheduled Game 4 starter before Game 3 was postponed a day by rain, delivered with the performance of his career and shut down the big bats in the AL champs' lineup.

He needed only two pitches to get the first two outs of the game and struck out Yordan Alvarez to end the first. The few jams he got into, Suarez worked his way out, notably in the second when he whiffed Chas McCormick and left two runners stranded. He retired Altuve to end the fifth on a soft foul pop with two runners on base.

"He's just a guy with no heartbeat," catcher J.T. Realmuto said. "It looks like he's playing a child's game."

Suarez saved the Phillies from having to use ace relievers Jose Alvarado and Seranthony Dominguez as four relievers each tossed a scoreless inning to finish the five-hitter.

"It's a really good Houston team over there," Harper said. "They have been here, they have been in all situations before and to be able to come in here and win the first game here was huge for us."

THE CHAMPS ARE HERE

The Phillies send RHP Aaron Nola (2-1, 4.57 ERA in the postseason) to the mound against Houston RHP Christian Javier (1-0, 1.35 ERA) in Game 4. Nola was done after 4 1/3 innings in Game 1 of the World Series, though he retired the final six batters he faced and left in a tie game after the Phillies rallied from an early 5-0 deficit - and won 6-5. Philadelphia plans to use RHP Noah Syndergaard in Game 5.