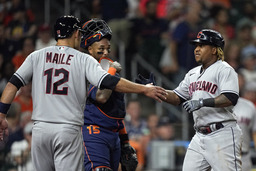 "Their lineup is potent and they're dangerous and he really pitched well," Francona said. "He really did. He was aggressive with his fastball, good off-speed, basically really pitched."

Jose Ramirez homered with four RBIs and McKenzie pitched seven sharp innings to help the Guardians to a 6-1 win over the Astros.

It was the fourth consecutive quality start for the 24-year-old who has a 2.07 ERA with 20 strikeouts in that span.

"We just stuck with the plan," McKenzie said. "I really just trusted myself and trusted (catcher Luke) Maile back there and just executed my pitches. Using the fastball early and then kind of just mixing in some curveballs later and just trying to keep them off balance."

Ramirez had two hits, highlighted by a two-run shot in the fifth inning that pushed the lead to 4-0.

McKenzie (3-3) allowed just three hits as he pitched a season-high seven innings for his second straight start. The only run he allowed came on a solo homer by Alex Bregman to start the seventh.

Houston starter Luis Garcia (3-3) allowed five hits and four runs, two of which were earned, but the other two came because of his throwing error in the third.

There was one out in the third when Maile and Myles Straw hit consecutive singles. Amed Rosario then reached on a fielder's choice on a grounder hit to Garcia. The pitcher badly overthrew second base for an error that allowed Maile to score and the two other runners to advance a base.

A groundout by Ramirez scored Straw to make it 2-0 before Garcia struck out Owen Miller to end the inning.

Maile walked to start the fifth before Ramirez smacked his homer to the bullpen in right center. Jose Siri tracked it to the wall and leaped to try and catch it, but it sailed just out of his reach.

It was the 10th homer this season for Ramirez.

"This kid's one the best players in the game," Francona said. "He just does it every day. He's a joy to watch."

McKenzie walked Yordan Alvarez with no outs in the second but didn't allow a hit until Martin Maldonado singled with one out in the third. Jose Altuve grounded into a double play to end the third and McKenzie retired the next eight batters after that.

He got some help on the first out of the sixth when shortstop Andres Gimenez snagged a grounder hit by Siri and spun around to make a nifty throw that beat the speedy outfielder to first.

Houston couldn't get much going offensively aside from Bregman's homer. They had just four hits and went 0 for 6 with runners in scoring position.

"Sometimes you get beat and get outplayed," Bregman said. "They played really well tonight."

Altuve doubled off the wall in center field with two outs in the sixth before Michael Brantley hit a fly out to end the inning.

The Guardians tacked on two runs in the seventh inning with the help of some more sloppy defense by the Astros. Maile singled with no outs and took second on a wild pitch by Bryan Abreu. Straw walked before a single by Rosario loaded the bases.

Ramirez then grounded into a force out that left Rosario out at second. But rookie shortstop Jeremy Pena overthrew first for an error on the play and two runs scored to make it 6-0.

Straw, who spent 3 1/2 seasons in Houston before being traded to Cleveland last July, was honored with a video tribute before the game. Manager Dusty Baker raved about Straw's contributions to the team and many Astros visited with the outfielder Monday during batting practice.