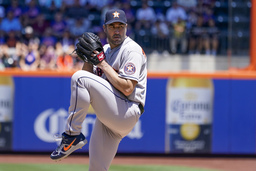 NEW YORK (AP) Justin Verlander has that look: four or five days of stubble when he takes the mound, a focused glare, a game-day demeanor that if not quite ornery is admittedly intense.

"I can't be that guy that rolls in on start day and is just kind of like loosey-goosey and having fun with guys and then try to turn it on when I take the field," he said. "It doesn't work for me."

Back in the major leagues after missing last year due to Tommy John surgery, Verlander once again is among the best pitchers in the game.

Verlander pitched two-hit ball for eight innings, light-hitting backup catcher Jason Castro lined a two-run drive in the ninth for his first homer this season and the Houston Astros beat the Mets 2-0 Wednesday to send New York to its first three-game skid this season.

"My curveball this year has been really good," Verlander said. "My slider is not as good as it was in `19. My fastball has playing pretty well, getting a lot of weak contact, kind of infield popups, high popups. Swing and miss is a little bit down. It's just interesting. I feel largely the same, but the stuff seems to be playing a little bit different."

Brandon Nimmo doubled on Verlander's first pitch, and Pete Alonso walked with two outs to put runners at the corners.

Jeff McNeil fouled off a full-count slider and then a fastball. Verlander shook off Castro four times and followed with one of only three changeups he would throw all day, an outside pitch McNeil chased for strike three.

"It's gotten me out of a couple jams year," Verlander said. "In my mind, it was screaming changeup. And I've been working on it, and I'm like, all right, well, if there's ever a time, here it is."

That started a streak of 12 consecutive hitters retired, including Dominic Smith on a grounder off a game-high 97 mph fastball that ended a 12-pitch at-bat in the fifth. Verlander retired 19 of his last 20 batters, allowing only Ender Enciarte's infield hit on a checked-swing dribbler in the fifth.

New York's Taijuan Walker gave up four hits in a season-high 7 1/3 innings - he was replaced with leadoff man Jose Altuve coming up and has not faced a batter four times in a game since 2017.

Kyle Tucker singled leading off the ninth against Drew Smith (1-2) and Castro, who began the day hitting .095 with one RBI in 74 at-bats, homered on a belt-high slider with two outs. Ryan Pressly pitched a perfect bottom half for his 16th save in 19 chances, finishing the Astros' second two-game sweep of the Mets in a nine-day span.

In the clubhouse after the game, Verlander said he adopted his game-day attitude in 2009 in order to focus.

"This kind of like intensity/anger, whatever you want to call it, started from the second I opened my eyes in the morning," he said.

Now he waits until heading the ballpark to morph into game mode because "it got a bit tiresome there after a few years of doing it." His goal was to "be less angry, especially with my family. That's a big benefit."

His wife, model Kate Upton, is appreciative along with 3-year-old daughter Genevieve.

"As I've gotten older, I've been able to kind of like just have this more calm demeanor during the day," Verlander said. "I'm able to kind of enjoy my wife and my kid and spend some time with them. But I know that she would tell you that I'm still different, quite a bit, on start day and really kind of lock it in on my way to the park."

Astros left fielder Yordan Alvarez and shortstop Jeremy Pena were hurt when they collided in the eighth while running down Dominic Smith's popup. Both called for the ball and as Pena caught the pop, and they hit each other in the face with their gloves. Alvarez was removed on a cart, sitting up, and Pena walked back to the dugout during the eight-minute delay. Both were walking in the clubhouse postgame, and Baker said the team was awaiting medical reports.

In a six-game trip against the Yankees and Mets, the Astros trailed only after two pitches - both walk-off hits by Aaron Judge.

Mets third baseman Luis Guillorme had a dozen chances - two putouts and 10 assists. Boston's Rafael Devers set the record for a nine-inning game with 14 against the Yankees in 2019.

Astros: RHP Luis Garcia (5-5) starts Thursday's one-game series at home against the New York Yankees and RHP Luis Severino (4-2), a makeup of a game postponed by the lockout.