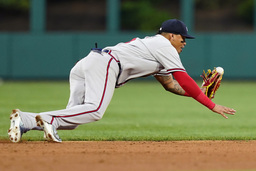 PHILADELPHIA (AP) Kyle Schwarber finished off the month with another June homer, Darick Hall went deep twice and the Philadelphia Phillies avoided a three-game sweep with a 14-4 rout of the Atlanta Braves on Thursday night.

Rhys Hoskins and Nick Castellanos also homered for the Phillies, who reached a season high in runs and were without star Bryce Harper in the lineup for the fourth straight game. The 2021 NL MVP is out indefinitely after having successful surgery on his broken left thumb on Wednesday.

"Everybody is getting hits, runs are scoring and the game of baseball is fun," Castellanos said. "Nights like tonight are fantastic."

Adam Duvall and Michael Harris II went deep for the defending champion Braves, who ended June with a 21-6 mark to equal the most victories in a calendar month since the club moved from Milwaukee to Atlanta in 1966.

"Hopefully I look back in three months and think that's the month that propelled us to another division title," Braves manager Brian Snitker said.

Schwarber connected on a three-run shot in the third for his 12th homer in June and 23rd of the season. The line drive to deep right also was Schwarber's 47th in 458 career June at-bats. His average of one homer every 9.74 at-bats in June is tops among all players in MLB history with at least 400 career at-bats, ahead of Babe Ruth's mark of a homer every 10.63 June at-bats.

Aaron Nola (5-5) allowed four runs and seven hits with eight strikeouts and one walk in seven innings. In his last five starts, the right-hander is 2-0 with a 1.70 ERA and 38 strikeouts and four walks in 37 innings.

The Phillies pulled away with seven runs and six hits in the second off Ian Anderson (6-5).

"Just one of those days," Snitker said of Anderson's outing. "Gotta flush it and get ready for the next one."

Castellanos' three-run homer and Matt Vierling's two-run double did the most damage in the inning, which also saw RBI singles by Alec Bohm and Bryson Stott.

"It was their night offensively," Snitker said. "They weren't missing."

After Schwarber's two-out shot off Jesus Cruz, Hoskins made it back-to-back homers with his second drive in two nights. An inning later, Hall led off with a solo shot to right for his first career hit after going hitless in his first six at-bats following a call-up from Triple-A Lehigh Valley on Wednesday.

"I'm just glad I didn't miss a bag," Hall said. "I was running, but my feet weren't feeling the ground."

Hall's second career hit also was a home run, as he launched a two-run shot to right in the eighth.

Philadelphia shortstop Didi Gregorius' second-inning miscue was long an afterthought by then. After the Braves loaded the bases with no outs, Nola struck out Duvall and then got Orlando Arcia to ground into a tailor-made double play. But Gregorius took the flip from second baseman Stott and began jogging toward the Phillies' dugout, apparently thinking that was the final out when it was just the second.

While not quite as successful as Atlanta, the Phillies also had a strong June record and finished the month with a 19-8 mark.

OF Ronald Acuna Jr. earned a starting spot in the All-Star game as the NL's leading vote-getter in Phase 1 of the balloting.

Braves: Acuna (bruised left foot) rejoined the club in Philadelphia after remaining in Atlanta for treatment to start the series, but he missed his fourth straight game though he was available to pinch-hit. Snitker anticipates Acuna will return to the lineup on Friday.

Phillies: RHP Zach Eflin (right knee bruise) received a cortisone shot earlier this week. On Tuesday, he was placed on the 15-day IL retroactive to June 26.