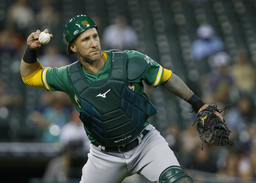 CHICAGO (AP) The Chicago Cubs added another catcher on Tuesday, agreeing to a $13 million, two-year contract with Yan Gomes.

The Cubs have Willson Contreras behind the plate, but he is eligible for free agency after next season and the team could decide to trade him if they can't reach a long-term deal this winter. They also could use Gomes to provide more rest for Contreras, who turns 30 in May.

A person with direct knowledge of the contract confirmed the deal to The Associated Press on Tuesday on condition of anonymity because it had not been finalized.

Chicago is retooling after going 71-91 this year for its first losing record since 2014. It claimed left-hander Wade Miley off waivers from Cincinnati on Nov. 7.

Owner Tom Ricketts said in an October letter to fans that the Cubs would "be active in free agency and continue to make thoughtful decisions to bolster our team this offseason." But the additions of Miley and Gomes have been their only moves of note so far.

Jay Cohen can be reached at https://twitter.com/jcohenap