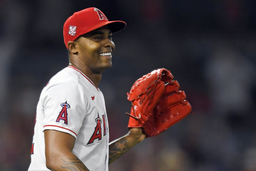 He gets $10 million next year and $16 million in each of the following three seasons.

Iglesias was outstanding in his first season with the Angels after they acquired him in a trade with Cincinnati a year ago. The Cuban right-hander had 34 saves while going 7-5 with a 2.57 ERA and 103 strikeouts with only 12 walks in 65 appearances.

His 8.58 strikeout-to-walk ratio was the best of his career, and he finished 11th in the AL Cy Young voting while repeatedly going multiple innings for the Angels, including eight saves longer than three outs.

The Angels declined to trade Iglesias at the deadline because they saw him in their long-term plans. When Iglesias turned down an $18.4 million qualifying offer last month, Minasian said he remained confident they could reach a deal.

Minasian also got some help from Mike Trout, manager Joe Maddon and several Angels who all called Iglesias in recent weeks, reminding him how much they wanted him back at Angel Stadium.

"Competition was fierce," Minasian said. "He's one of the more talented guys out there. We feel like he's one of the better pitchers, not just relievers, in the game. We felt there was going to be significant competition, and there was."

Iglesias, who turns 32 next month, was likely the most desired reliever on the free agent market after his strong performance for the Angels on the back of six solid seasons for the Reds, who signed him in 2014, several months after he defected.

Iglesias has a career ERA of 3.06 with 140 saves, including at least 28 saves in each of the past four full major league seasons despite playing for four teams that finished with losing records.

Minasian is focused on rebuilding the Angels' pitching staff after they finished 22nd in the majors in ERA during the latest season in a decade of mostly poor mound performance.

Iglesias will be joined in the Angels' bullpen by Aaron Loup, who agreed to a two-year, $17 million contract as a free agent last month. The veteran left-hander also was one of the majors' most effective relievers last season for the New York Mets.

Los Angeles signed right-hander Noah Syndergaard to a one-year, $21 million contract to join Shohei Ohtani in their rotation. The Halos also added right-hander Michael Lorenzen, a versatile former teammate of Iglesias in Cincinnati who could contribute in the rotation or the bullpen.

Minasian confirmed that the Angels' initial plan is for Lorenzen to compete for a spot in their six-man starting rotation. Lorenzen, who agreed to a $6.75 million deal with his hometown team Tuesday, has been "dying to start," the GM said.

Lorenzen also played the outfield and hit .233 with a respectable .710 OPS with Cincinnati, and Minasian didn't rule out Lorenzen remaining a two-way player in Anaheim alongside Ohtani.

"We have a creative manager who isn't afraid to experiment," Minasian said.

The Angels also acquired utility player Tyler Wade from the Yankees in a trade last month.

To make room on their roster for Iglesias, the Angels designated right-hander Sam Selman for assignment.