Mets to introduce Buck Showalter as manager Tuesday via Zoom 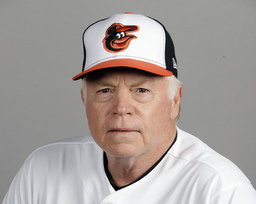 The team said Monday evening in a press release that Showalter agreed to a three-year contract to become the 24th manager in Mets history. A news conference was scheduled for Tuesday afternoon via Zoom.

"This is a tremendous opportunity and a great responsibility to represent this organization, all Mets fans and this city. I'm energized and eager to get started," Showalter said in the press release.

Showalter will wear No. 11 with the Mets as he takes over his fifth major league club. He began his career as a big league bench boss across town with the New York Yankees in 1992 and also has managed the Arizona Diamondbacks, Texas Rangers and Baltimore Orioles.

"Buck has been one of the best baseball minds for the last two decades and he makes teams better," Cohen said. "We have a lot of talent on this team and Buck is the right manager to take us to the next level and lead us to sustained success. I am excited he is our new manager."

The 65-year-old Showalter has made five playoff appearances in 18 full seasons, taking all his teams besides Texas to the postseason at least once. He helped the Yankees halt a 14-year playoff drought in 1995, led Baltimore to the 2012 postseason after a 15-year absence and guided the 1999 Diamondbacks to 100 wins and an NL West title in their second season.

"Buck is one of the most experienced and accomplished managers in the game," new Mets general manager Billy Eppler said. "He is the perfect baseball mind to lead this team and usher in the next era of Mets baseball. I look forward to working closely with him in the years to come."

Eppler and Mets President Sandy Alderson also will be on the Zoom conference Tuesday.

"This has been an extremely thorough process and I am delighted that Buck will be the next manager to lead the Mets," Alderson said. "He is dedicated and experienced, which are two key qualities we were seeking in the next leader of this team."