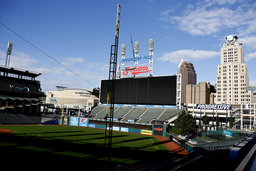 CLEVELAND (AP) The Cleveland Guardians have reached an agreement to extend their lease at its downtown ballpark through at least 2036 while making improvements to the facility, team owner and CEO Paul Dolan announced Thursday.

Team officials said they've obtained financing to renovate Progressive Field, a ballpark that opened for play in 1994. The cost of the improvements has been estimated at just over $200 million. Renovation work is expected to begin after the 2022 season.

"We are confident that this agreement will create a more compelling fan experience and keep this facility modern and relevant for many more years to come," Dolan said in a statement.

The Cleveland City and Cuyahoga County councils previously approved the agreement. The city and county will contribute a total of $17 million, Ohio $2 million and the team $10 million a year to pay for the improvements and costs such as repairs, maintenance, operations and property taxes.

The agreement could be extended another 10 years to 2046, team officials said.