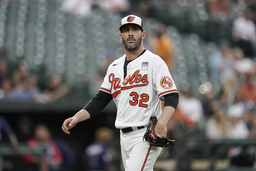 NEW YORK (AP) Baltimore Orioles pitcher Matt Harvey was suspended for 60 games by Major League Baseball on Tuesday for distributing a prohibited drug of abuse, a punishment stemming from his admission of providing opioids to a teammate who fatally overdosed.

The former New York Mets star also admitted in February during a federal trial in Texas stemming from Los Angeles Angels pitcher Tyler Skaggs' death that he used cocaine while in New York and California.

"We support all aspects of MLB's joint drug prevention and treatment program and their ruling in this particular case," Orioles general manager Mike Elias said in a statement. "I am glad that Matt now has the opportunity to put this part of his past behind him and pursue another shot with our organization after serving his suspension."

Harvey, a 33-year-old right-hander, agreed last month to a minor league contract with the Orioles that called for a $150,000 salary while in the minor leagues, a $1 million salary while in the major leagues and a $500,000 assignment bonus if traded while under a major league contract. He has been working out at Baltimore's extended spring training facility and has not pitched in any games.

The suspension is retroactive to April 29. Under an agreement between MLB and the players' association, minor league games will count toward the suspension, a person familiar with that provision told The Associated Press, speaking on condition of anonymity because that was not announced.

Harvey would be eligible to be active on July 8, if there are no postponements.

During the trial of former Los Angeles Angels employee Eric Kay, Harvey, pitchers Mike Morin and Cam Bedrosian and first baseman C.J. Cron testified and described recreational drug use allegedly going on among and around the Angels when they played for the team.

Skaggs was found dead in a suburban Dallas hotel room on July 1, 2019, a day the Angels were supposed to open a four-game series against the Texas Rangers. Kay was convicted on one count each of drug distribution resulting in death and drug conspiracy. He faces at least 20 years and up to life in prison when he is sentenced on June 28.

Nicknamed the Dark Knight of Gotham, Harvey was selected seventh overall by the Mets in the 2010 amateur draft and made a heralded major league debut in 2012. He started the 2013 All-Star Game at Citi Field but a little more than a month later tore the ulnar collateral ligament in his pitching elbow and needed Tommy John surgery.

Harvey returned in 2015 and went 13-8, helping the Mets reach the World Series, where he talked manager Terry Collins into letting him take the mound with a two-run ninth-inning lead against Kansas City in Game 5. Harvey walked Lorenzo Cain and allowed an RBI double to Eric Hosmer, Salvador Perez hit a tying groundout off Jeurys Familia and the Royals went on to a 12th-inning win that gave them the title.