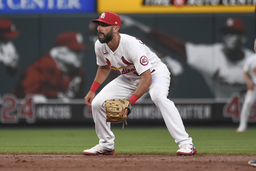 ROUND ROCK, Texas (AP) Three-time All-Star infielder Matt Carpenter was released by the Texas Rangers from their Triple-A team Thursday, and became a free agent in a mutual decision because of the lack of opportunity with their big league team.

The 36-year-old Carpenter went to spring training on a minor league contract and accepted the assignment to Round Rock when he didn't make Rangers' opening day roster. He hit .275 with six homers and 19 RBIs in 21 Triple-A games, but Texas still didn't have room for him in the majors.

Carpenter played his first 11 major league seasons with the St. Louis Cardinals, who took him in the 13th round of the 2009 amateur draft from TCU, which is about 20 miles from the Rangers' home ballpark.