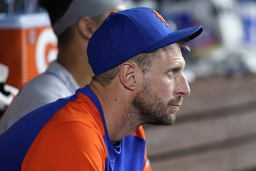 NEW YORK (AP) Mets ace Max Scherzer had his minor league rehab start with Double-A Binghamton pushed back a day to Wednesday, but New York manager Buck Showalter says there has been no setback in his recovery from a strained oblique.

Scherzer will be pitching on seven days of rest after his first rehab start with the Rumble Ponies on June 21. Over the weekend, New York dashed speculation that the three-time Cy Young Award winner would be ready to return for Sunday's game in Miami.

The Mets instead announced the 37-year-old would pitch for Binghamton against the Hartford Yard Goats on Tuesday.

Showalter said the Mets decided Monday that Scherzer should pitch Wednesday instead, citing discussions with Scherzer about how he felt and general caution with the nature of his injury.

"There's no reason to rush it," Showalter said. "We're not going to make that mistake."

Showalter added that Scherzer "thinks he could pitch here tonight" for the Mets in their game against the Houston Astros.

"I think he came around," Showalter added.

The NL East-leading Mets had Jeff McNeil back in the lineup Tuesday after he missed five games with right hamstring tightness. The 2019 All-Star was set to bat eighth and play second base.