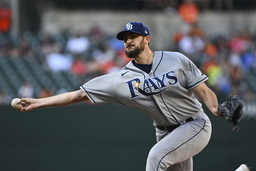 TORONTO (AP) The Tampa Bay Rays put left-hander Brooks Raley and right-hander Ryan Thompson on the restricted list Thursday before opening a five-game series in Toronto against the Blue Jays.

In addition, left-hander Jeffrey Springs was put on the family medical emergency list and lefty Ryan Yarbrough was recalled from Triple-A. Righties Dusten Knight and David McKay were added to the taxi squad for the trip to Toronto.

To enter the country, the Canadian government requires a person to have received a second COVID-19 vaccine dose - or one dose of the Johnson & Johnson vaccine - at least 14 days before entry.

Unvaccinated players go on the restricted list because they are not paid and do not accrue major league service time, according to a March agreement between Major League Baseball and the players' association.

Springs had been set to start against Toronto on Thursday. Instead, right-hander Matt Wisler will open, with Yarbrough expected to follow him.

The Rays and Blue Jays are playing a doubleheader Saturday, one of two they'll play in Toronto this season to make up an April series canceled by the lockout.