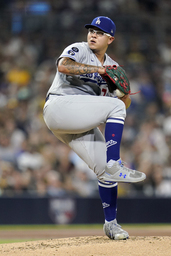 Freeman singled in Mookie Betts with one out in the 10th inning and the Dodgers beat the San Diego Padres 1-0 in the second straight extra-inning game between the rivals.

"That's a lot of wins, if you really think about it," Freeman said. "A lot of good things have to happen from a lot of guys. Not just 26 guys, but 40 to 45 guys have to contribute to be able to do that.

"If you think about it, it's the pitching," Freeman said on a night when Julio Urias, one of the leading contenders for the NL Cy Young award, pitched six scoreless innings. "Our pitching has been absolutely phenomenal all season long. They give us a chance. We haven't done really well with runners in scoring position in the last couple of days and they put up zeroes all day until we got one in."

The win by the NL West champion Dodgers kept the Padres' magic number at four for clinching a playoff spot in a full season for the first time since 2006.

It also put the Dodgers in position to win their ninth straight series against the Padres since June 2021. The series finale is Thursday night.

The Dodgers have already clinched the No. 1 overall seed in the NL playoffs.

"Once Oct. 11 hits, no one's going to care how many wins you had in the regular season," Freeman said. "That's the big thing. We're here, we're in the regular season, we might as well get as many wins as we possibly can. You've got to play good baseball from start to finish to be able to accomplish something like this and we've been doing it."

Betts started as the automatic runner on second base and advanced on a passed ball before scoring on Freeman's hit to center over a drawn-in infield off Steven Wilson (4-2), his career-high 192nd.

"I was going for a hit when Mookie was on second, trying to get the slider up," Freeman said. "Usually I go to left field, but with the slider coming in I was trying to hit it just right of second base. That was the plan. I didn't know if it was going to work. Once the ball got away and he got to third, all I was trying to do was hit a fly ball to center field. I hit it in the air and I hit it to center field. It just didn't go very far but it went far enough."

Alex Vesia (5-0), who grew up in the San Diego area, pitched the ninth for the win. Tommy Kahnle pitched the 10th for his first save. He got Kim Ha-seong to ground out to end it with Jurickson Profar on third base.

The Padres are closing in on their first playoff berth in a full season since winning the NL West for the second straight year in 2006. They beat St. Louis in a wild-card series in the pandemic-shortened 2020 season before being swept in the division series by the eventual World Series champion Dodgers.

"I'm not focusing on any of that stuff," Urias said of the Cy Young Award talk. "Every time I get on that mound I try to do the best I can and pitch. I don't really worry about the things that people say, the accolades or anything like that. I just focus on doing my job and then also I think that's something that motivates me to do a better job."

His next start will be in the penultimate game of the regular season. Manager Dave Roberts said before the game that Urias could start the first playoff game.

Musgrove labored through 106 pitches before handing off a scoreless tie to Tim Hill.

Musgrove loaded the bases in the first and fifth innings and escaped both jams by striking out Joey Gallo. He threw 34 pitches in an 18-minute first inning. After striking out Gallo to end the fifth on his last pitch of the night, Musgrove pumped his right fist and hollered.

The Padres wasted a prime scoring chance in the sixth, when they had runners on first and third with one out. Manny Machado walked with one out, stole second and was called out. But he signaled to the dugout to challenge the play even before he got up off the ground, and the call was overturned. He advanced on Brandon Drury's single but Urias retired Will Myers and Jake Cronenworth on infield popups.

Dodgers: Placed RHP Phil Bickford (2-1, 4.72 ERA in 60 appearances) on the 15-day injured list with right shoulder fatigue and activated RHP Yency Almonte from the IL. ... Roberts said Tony Gonsolin, on the IL with a right forearm strain, is scheduled to start Monday at Dodger Stadium against Colorado and pitch three innings.

Neither team has named a starter for the series finale Wednesday night.