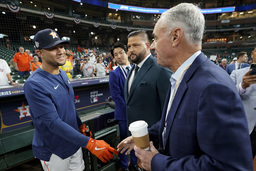 The A's have played at the Coliseum since 1968 and their lease expires after the 2024 season. After proposing and withdrawing plans for ballparks in Fremont and San Jose, the team announced in November 2018 it had found a waterfront location for a new ballpark at Howard Terminal, close to the Jack London Square neighborhood.

Major League Baseball instructed the team in May 2021 to explore relocation options if no ballpark agreement could be reached. Team president Dave Kaval has said the club was working on plans along "parallel paths" in Oakland and Las Vegas.

"The pace in Oakland has not been rapid, number one," Manfred said Monday after announcing Game 3 of the World Series between Houston and Philadelphia had been postponed by rain. "We're in a stadium situation that's really not tenable. I mean, we need to do something to alter the situation. So I'm concerned about the lack of pace.

"Given the fact that they have not made a deal in Oakland - and I've been talking to this since the day I started, that's eight years ago, I think it's prudent that they are exploring another alternative because something needs to happen in Oakland."

The San Francisco Bay Conservation and Development Commission voted 23-2 in June to reclassify a 56-acre terminal at the Port of Oakland as a mixed-use area where a new ballpark could be built. The vote is the first in a series of legal hurdles the team would have to overcome before it gets permission to break ground for the project.

Manfred said any timetable for a possible relocation decision would be "partially dependent on decisions that Oakland - the team - may make."

Manfred said MLB revenue this year will be just shy of $11 billion, up from $10 billion before the pandemic.

Manfred said the expansion of the playoffs from 10 teams to 12 was key.

"We've had a phenomenal year," he said. "In September we saw the benefits of the new playoff format. We had, in particular, weekend draws that we hadn't seen since 2014. That's what it was about: more interest in September baseball. I think that the three-game wild-card round performed really well on a weekend against football."