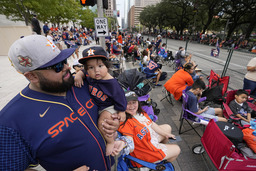 Houston Mayor Sylvester Turner had encouraged fans coming to the victory parade to "arrive early, wear Astros' colors, be loud and celebrate safely." The parade, which started at noon and lasted for a couple of hours, packed sidewalks with people as Astros players riding floats and buses waved at cheering fans.

The parade took place without any serious incidents, except for the arrest of a 33-year-old man who was accused by Houston police of throwing a beer can at U.S. Sen. Ted Cruz, who was riding in the back of a truck that was part of the parade. Police said the beer can hit the Republican senator from Texas in the chest and neck area but he did not require any medical attention. The man was arrested by police but his name was not immediately released. He is expected to face assault charges, police said.

Video from the parade showed people along the route booing Cruz as he went by, including just before he was hit by the beer can.

Although a final tally of the number of people at the parade was not immediately available, it was expected to surpass the 1 million individuals who attended the parade held after the Astros won their first World Series in 2017, said Mary Benton, a spokeswoman for Turner.

Saturday's win gave the Astros' 73-year-old manager Dusty Baker his first title in 25 seasons as a manager, the last three in Houston.