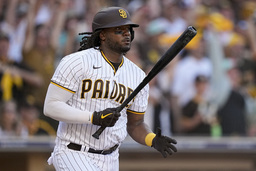 SAN DIEGO (AP) The Cleveland Guardians and slugging first baseman Josh Bell have agreed to a $33 million, two-year contract, according to a person familiar with the negotiations.

The person spoke to The Associated Press on Tuesday on condition of anonymity because the deal was pending a review of medical records.

Bell played for Washington and San Diego last season, batting .266 with 17 homers and 71 RBIs in 156 games.

Cleveland is coming off a surprising 2022 season, going 92-70 and winning the AL Central for the first time since 2018. The addition of Bell gives the Guardians more power for their lineup after they hit just 127 homers this year - the second-lowest total in the majors.

The switch-hitting Bell also is expected to benefit from restrictions on defensive positioning coming to the game next year.