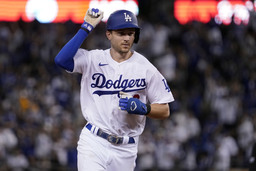 PHILADELPHIA (AP) Bryce Harper lobbed Philadelphia's first recruiting pitch over the summer when the injured All-Star used a guest stint in the broadcast booth to advocate for the future free agent and his former Washington teammate.

"Trea Turner, he's my favorite player in the league," Harper said. "Not even close."

Harper and Turner have been reunited by the National League champion Phillies for the upcoming season and well beyond. Turner's $300 million, 11-year contract with the Phillies was finalized Thursday, a deal that'll take the 29-year-old shortstop and 2021 NL batting champion into his 40s.

A long-term risk, perhaps, for the Phillies, but one owner John Middleton and president Dave Dombrowski were willing to take with the Phillies' championship window open for the next few seasons. Harper still has nine years left on his $330 million, 11-year free-agent deal, though he could miss at least two months as he recovers from elbow surgery.

Turner can certainly help steady a lineup that lost a combined a no-hitter to the Houston Astros in the World Series and lost in six games - and likely from the top of the order, knocking free-swinging NL home run champ Kyle Schwarber down a spot or two.

Schwarber, who struck out 200 times, did steal a career-high 10 bases. Turner, though, has led the league in steals twice and had 27 last season.

"He stole a lot of bases last year. He's kind of coming around there," Turner said with a laugh. "I don't know if I want to kick him out of there."

Turner hit .298 with 21 homers and a career-high 100 RBIs this year in his first full season with the Los Angeles Dodgers. He also scored 101 runs.

"We pictured playing with Bryce and Schwarber and a lot of those guys on the team now," Turner said at Citizens Bank Park. "It just seemed like a lot of things added up and pointed us in this direction."

Turner and his family met with Dombrowski, general manager Sam Fuld and manager Rob Thomson last month in Florida. Turner had other suitors and turned down at least one richer offer to sign with Philadelphia.

"This place is fun to play," Turner said. "I watched a lot of playoff games and this place was rocking."

Dombrowski downplayed the decision to spend so much money on Turner, especially deep into his 30s, when players are traditionally on the downside of their careers.

"I do think sometimes you have to differentiate between a normal big league player and an elite athlete," Dombrowski said. "I do think there are some differences in that regard, too. We have done a lot of research in that regard. An elite athlete can last longer at the performance level than, say, other individuals can."

Bigger bases and restrictions on defensive positioning coming to the game next year likely enhanced the free-agent market for Turner, because those are two changes that make his athleticism and defensive versatility more valuable.

He turned down a $19.65 million qualifying offer from the Dodgers in November, joining a stellar group of free-agent shortstops that also included Carlos Correa, Xander Bogaerts and Dansby Swanson.

Turner broke into the majors with Washington in 2015. The two-time All-Star hit .300 with 192 steals in six-plus seasons with the Nationals, winning the World Series in 2019.

Turner and ace right-hander Max Scherzer were traded to the Dodgers in a multiplayer deal at the 2021 trade deadline. Turner hit .338 with 10 homers and 11 steals down the stretch, and Los Angeles made it to the NL Championship Series before being eliminated by Atlanta.

Turner and Harper played with the Washington Nationals from 2015-18. Harper, who won an NL MVP award with each team, texted Turner in the offseason and served as a sounding board for questions he had about Philly.

Turner had one on Thursday: Where's the best place to eat? He'll have 11 years to sample all of Philly's cuisine.