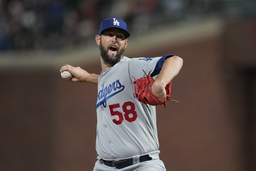 He joins Hall of Famer Dennis Eckersley as the only pitchers since 1900 who have had more than one season with at least 50 innings pitched and five walks or fewer.

The Red Sox first signed Martin as a free agent in 2011 and he pitched three seasons in the system before he was traded to the Colorado Rockies in 2013.

As part of the deal, Martin will make a charitable contribution not to exceed 1% of his contract.